Speculative Bubbles in The United States and Japan

Economic recessions present major burdens to the nations who face them.  During these downturns unemployment rises, household incomes fall, and gross domestic product (GDP) is reduced.  Investment spending and corporate profits drop and the price level begins to fall, sometimes bringing forth a threat of deflation.  Typically recessions last for only a short period of time, but sometimes the collapse is so devastating the effects are widespread and persist for many years.
While Japan’s asset collapse in the late 1980’s and early 1990’s draws many parallels with the United States Financial Crisis in 2008, the two calamities also had many stark differences. It is important to note that most literature discussing Japan’s asset bubble comes from a pre-2008 perspective. As a result, policy decisions made in Japan are often compared to those in the United States. These comparisons assume the United States was not headed toward a housing bubble of its own. This distinction is crucial because financial liberalization itself is seldom blamed for the asset bubble in Japan.
The recent financial crisis led to an eighteen-month long recession dating from December 2007 to June 2009,
the longest recession in the United States since the Great Depression (Business).  This “Great Recession” as much of the media and populace like to term it, brought about massive unemployment, a continual reduction of the United States GDP, and general panic about the future of the country’s economy.  Although national output has since rebounded from the mid-2009 trough, the unemployment rate remains at a relatively high 9.6% (Labor). 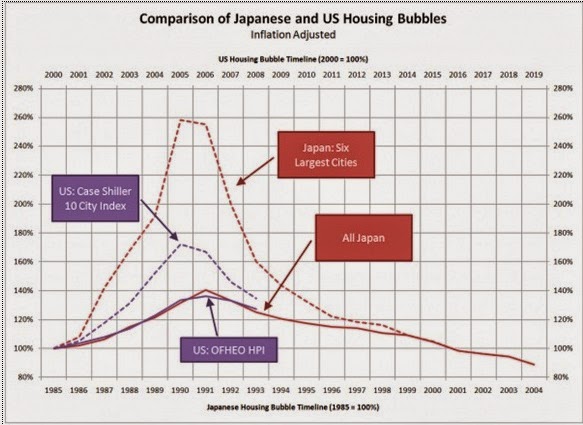 Housing prices in the United States have yet to stabilize. Although their decline has been softened by tax incentives and low interest rates, the surplus of foreclosures currently on the market is proof enough that the plunge is far from over. Japanese housing prices did not fully reach bottom until 15 years later in 2005 but they turned down again in 2008. If the decline in prices lasts a similar length of time in the United States housing prices won’t consistently rise again until after 2020.
Unlike Japan’s government, the United States did not burst its own bubble with a large increase in interest rates. Instead the United States’ bubble began with the homeowners being unable to pay their mortgage obligations. While housing prices had skyrocketed, median income in the United States barely moved from 2000 to 2007. As a result, homeowners were unable to repay their loans.
During the boom, financial institutions used mortgage securities as collateral for short term lending. In turn, they used this short term lending to finance everything from payrolls to long term investments like car loans. When the short term lenders (money market funds), realized that the securities were riskier than previously thought, they demanded much more collateral for short term lending. What ensued was a sudden lack of short term credit that forced companies to lay off workers in order to balance their budgets.
In contrast to Japan, the United States quickly lowered interest rates to try and free up credit. Early on the Federal Reserve saved Bear Stearns from bankruptcy because it was the first institution to go to the brink of failure overnight. Lowering interest rates to near zero was hardly enough to compensate for the sudden lack of credit. Soon Leman Brothers approached bankruptcy and when efforts to negotiate a buyout failed, the large firm filed for bankruptcy. A Domino effect quickly ensued. The collapse was driven by both the debts of Leman Brothers to multiple firms, including a money market fund that also declared bankruptcy, and by the sudden lack of confidence that results when a major firms declares bankruptcy.
At the peak of Japan’s crisis, the government had just raised interest rates. It took the government about 5 years to get the discount rate and the interbank rate to almost zero from 6% and 8% respectively (Cargill 96). While the United States quickly lowered their interest rate to zero, neither countries’ monetary policies solved the ensuing recession.
Recessions are largely defined by the unemployment rate. While GDP growth is the technical determinant of a recession, the unemployment rate is the standard by which the public judges the health of the economy. For this reason it is important to examine the unemployment rates of Japan and the United States in their post asset bubble economies. The unemployment rate in Japan has historically been very low, usually remaining under 3 percent. Economists believe there are two major reasons for this: methodical and definitional differences and Japan’s employment system as compared to that of the United States.
Some critics argue that Japan does not follow international standards as it calculates its unemployment rate based on different principles. Uwe Vollmer states a few differences between how unemployment is characterized in the two countries under study:
Their concepts differ mainly in the definition of the unemployed vis-à-vis persons outside the labor force. Excluded from the unemployed in Japan but included in the United States are persons who have sought jobs in the previous four weeks but did not take active steps to find work during the survey week, and persons who are currently without a job but are waiting to report to a new job within 30 days. (297)

On the other hand United States’ unemployment statistics record a person outside of the labor force if they made their last job search over a month ago while in Japan they are considered unemployed members of the labor force. It is essential to note that many economists believe these differences in calculations are not the main cause in the varying levels of unemployment in the United States and Japan.
Commonly, the more important cause of Japan’s low unemployment rate is thought to be the structure of the labor market itself. The Japanese labor market is more stable than that in the United States because many companies offer their employees long-term employment, sometimes guaranteed to retirement. Therefore job changes are less likely to occur in Japan than in the United States.  Japanese workers tend to have the same job for an average of 12 years while the average tenure for workers in the United States is only 7 years. Furthermore, 50% of the Japanese workforce tends to hold a job for longer than 10 years while the majority of workers in the United States hold their jobs for an average of less than 5 years (Vollmer 299).
Another factor that plays an important role to the low unemployment rate in Japan is its rigid real wage and bonus system. The amount of a worker’s bonus depends on the success of the last six months of the company’s activity; worker compensation based heavily on bonuses prevents major deviations in the real wage. For instance, if there is an increase or decrease in productivity then workers will receive respectively more or less in bonuses while the real wage stays at the same level. This system allows Japan to handle external economic shocks without a rise in unit labor costs and unemployment. Conversely in the United States wage is adjusted annually so when facing cases of adverse shocks the unemployment rate goes up because companies start to lay off their workers.
Prior to the collapse of the asset bubble the Japanese labor market was working extremely well, with the unemployment rate below 3% for a period longer than 30 years. However, in the early 1990s the unemployment rate started to rise. The Japanese economy experienced stagnation for approximately the next 10 years and its unemployment rate remained higher than normal, around 5%. In comparison, the United States’ unemployment rate historically averages between 5-6%, but due to the recession experienced rates over 10% at times (Cargill 6).  The financial crisis in the United States unfolded much quicker than Japan’s crash in the 1990s, and brought harsher results to the labor force as well as national output.
Recently China surpassed Japan and became the second largest economy in the world. Up until then, Japan and the United States had been the two largest economies in the world for decades. In that light, it is perhaps not that surprising that both countries succumbed to irrational optimism about their housing markets. While the lead up to and the collapses themselves are unmistakably similar, ultimately the similarities of the crises will be judged by the speed at which the United States recovers. Unfortunately, if Japan’s struggle gives us any insight to the future, the United States will not experience a substantial recovery for a long time.
Works Cited

This work is licensed under a Creative Commons Attribution-ShareAlike 4.0 International License.